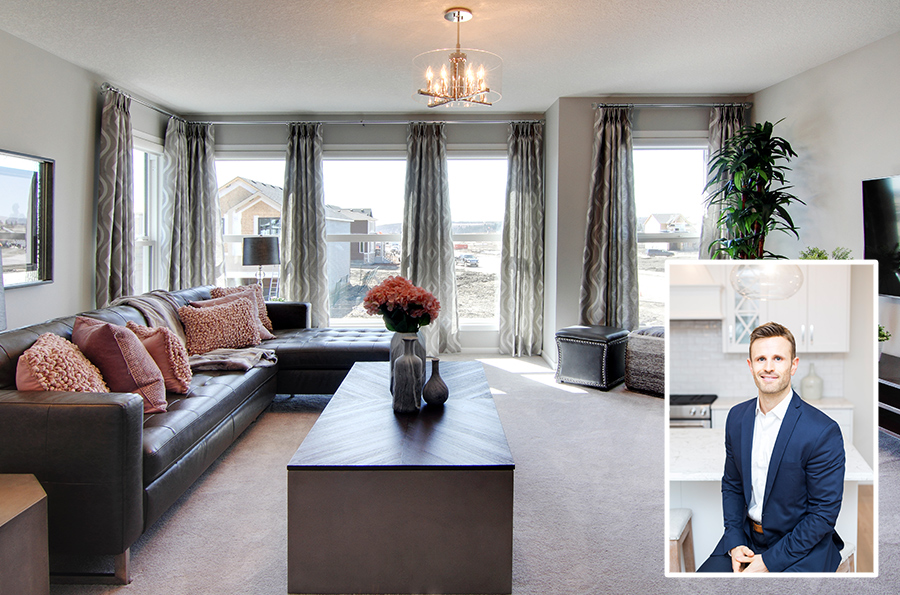 Cedarglen Homes is beyond proud to have one of the greatest sales teams here in Calgary and each person plays an integral role in the overall success of the company. We wouldn’t be where we are today without their ongoing commitment to helping Calgarians build their dream home.

We currently build in several communities across Calgary that each offer their own unique benefits depending on what you are looking for. One of the newest areas that we are building in is Belmont, which is situated just west of Macleod Trail and south of 194th Avenue. If you’ve had a chance to make it out to our showhomes here, then you’ve likely been fortunate enough to meet our rock star Area Sales Manager Ryan Christensen.

Ryan has been with Cedarglen in some capacity since 2001 when he started as a summer student working as a laborer in Mckenzie Towne. Here he hauled lumber, cleaned lots and did plenty of landscaping. He started his full-time position with the company in 2005 and has bounced around as the resident Renaissance Man with his longest tenure as the Kitchen Designer before making the move to the showhomes. We’ve been fortunate enough to get to know Ryan well over his years with the company, but we decided to ask him a few more questions so you could get to know him better.

1. WHY WOULD YOU CHOOSE TO BUILD WITH CEDARGLEN HOMES AND WHAT MAKES THEM UNIQUE?

I’d choose to build with Cedarglen for the very same reason I sell their product: because I believe in its inherent, industry exceeding quality, and because of the friendships I’ve made with the team. This proves the customer service here goes beyond the typical relationship between business and buyer. Cedarglen and its homeowners become a family. Every home Cedarglen builds is just another limb extending from its family tree. I’ve always appreciated the hard work that’s gone into ensuring the experience is positive and lasting.

2. WHAT IS YOUR FAVORITE MODEL & WHY?

Coming from kitchen design, I’d have to say my favorite plan in the current roster is the Huxley 28 due to the unlimited potential of its galley kitchen. But I’ve always been very fond of the previous Summit and Logan designs due to the open to above great room concept; the two-story space has always lent a home’s interior a certain majesty that somehow increases the plan’s overall space and wow factor, all while paradoxically removing square footage.

3. WHAT IS YOUR FAVORITE PART ABOUT BELMONT?

Belmont is very new, and I think as part of its charm is the novelty of having people stumble in unaware of its existence. I appreciate the isolation of Belmont. It’s a part of Calgary, but it feels apart from the city at the same time. It isn’t alienated, but it feels isolated in its cradle among the southwest foothills. My favorite part of the day is the drive in to work down 194th Ave. You exit Macleod and you’re suddenly away from the city, the hustle and bustle, and the Rocky Mountains line the horizon as you make your approach, appreciating the silence and your removal from the gridlock. It’s a temporary bliss, and a nice reminder of how incredibly close we are to nature in this city.

4. WHAT DO YOU LIKE TO DO OUTSIDE OF WORK?

I’m a writer. A novelist, to be exact. I’ve written eight novels, with my most recent available for free online (www.reedycreeknovel.com). I’ve since been working with my brother to adapt that novel, Reedy Creek, into a miniseries, turning the massive book into episodic screenplays and a series bible to approach networks or Netflix for financing and distribution. Fingers crossed.

5. WHAT IS A GOOD HOMEBUYERS TIP FOR PEOPLE LOOKING TO BUILD A NEW HOME?

Because Belmont is so relatively new, my greatest tip for homebuyers is to take advantage of the pre-amenity pricing in any new community. Many buyers cannot find the long-term imagination to look past the current stage of a community and would prefer buying property once the area has blossomed into something other than dirt and development. This early stage is to the most benefit of the buyer: you get the greatest lot pricing at this stage, and you ultimately reap the advantages of the inevitable equity in your property once the area builds up around you, and the promised amenities start popping up.